In recognition of Dr. Martin Luther King, Jr. Day of Service, Please Touch Museum created a collaborative art mural where children and families could share their hopes and dreams for the city of Philadelphia.

The mural was inspired by Dr. King’s 1963 “I Have a Dream” speech during the March on Washington for Jobs and Freedom. Displayed at the base of the Torch in Hamilton Hall, the mural replicates an image of Dr. King delivering his speech to the many people who gathered on that historic day to draw attention to the continuing challenges and inequalities faced by African Americans a century after emancipation. With a painting of Dr. King at its center, the Museum’s mural was left open for children and caregivers to surround Dr. King by contributing face-shaped cutouts including words or drawings of their own hopes and dreams for Philadelphia. What they shared was profound.

Over 500 hopes and dreams were created during the installation. Students attending schools in the Parkside neighborhood and members of the Parkside Community were asked to contribute to the mural. Museum visitors on January 4 and January 6-16 were encouraged to stop by a table to learn more about Dr. King’s life and legacy and share their own dreams for the future. 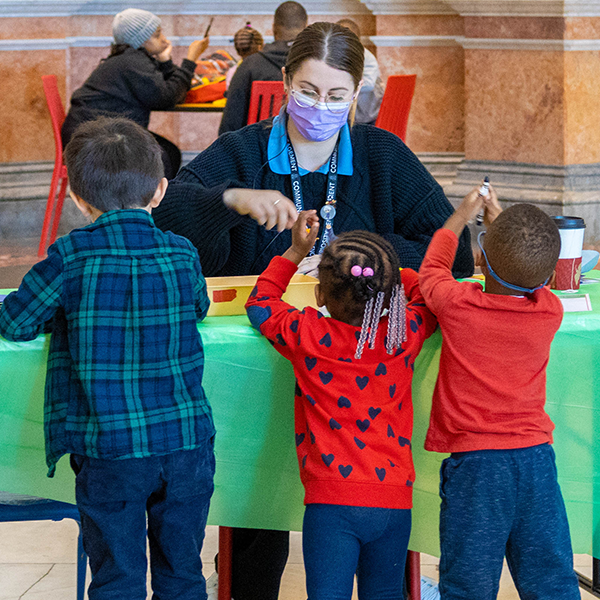 Voices of the Children

Throughout the 500 submissions to the I Have a Dream mural, several key themes emerged. Below are the themes and verbatim quotes from four, five and six-year olds who came to the Museum and contributed to the mural.

Children are deeply impacted by the gun violence in Philadelphia and it is forefront in their thoughts.

End to Racism and Discrimination

Many hopes and dreams on the mural centered around an end to racism and discrimination.

Kindness and Respect for Each Other

Messages of inclusion, acceptance, understanding, kindness and respect for each other were evident throughout the mural.

A Clean City and Safe Housing for All

Children and caregivers shared their hopes for living in a clean city where it is safe to play outside and everyone has a home.

Caregivers participated in the mural as well, dreaming for “More quality housing for the disabled,” and another, “I pray that Philadelphia will become a safe place for my children and my children’s children to grow, live, love and be successful.”

Over 3,800 people visited the Museum for the Martin Luther King, Jr. Celebration. The day culminated with the beloved End of Day Parade in front of the Mural, where children were dancing and playing musical instruments before their departure. A mother remarked to one of our staff members, “It is magical watching all the children dancing together in front of the giant portrait of Dr. Martin Luther King, Jr. It honestly is making me get a little emotional.”

The profound hopes and dreams of the children of Philadelphia have made the staff at Please Touch Museum emotional as well. The sentiments shared in the collaborative mural are a call to action to the grown ups in Philadelphia and the Museum team is thinking deeply about its role to play in addressing the specific hopes and dreams of these children.

Artists’ Statement:
The mural was inspired by the famous photograph of Dr. Martin Luther King, Jr. delivering his “I Have a Dream” speech in front of thousands of people on August 28, 1936. In our version, the children’s hopes and dreams represent the legacy that lives on because of the people that he inspired, i.e., the spectators in the original photograph. This mural represents the hopes and dreams of people who have visited the Please Touch Museum and students from the Parkside Community.