Approaching 50 Years of Learning through Play

Our History of Play

In 1976, as the United States was celebrating its Bicentennial, a big revolution was happening in a very small place. On the top floor of the Academy of Natural Sciences, the Please Touch Museum, Philadelphia’s first museum dedicated to children seven and younger, opened to families in Philadelphia. 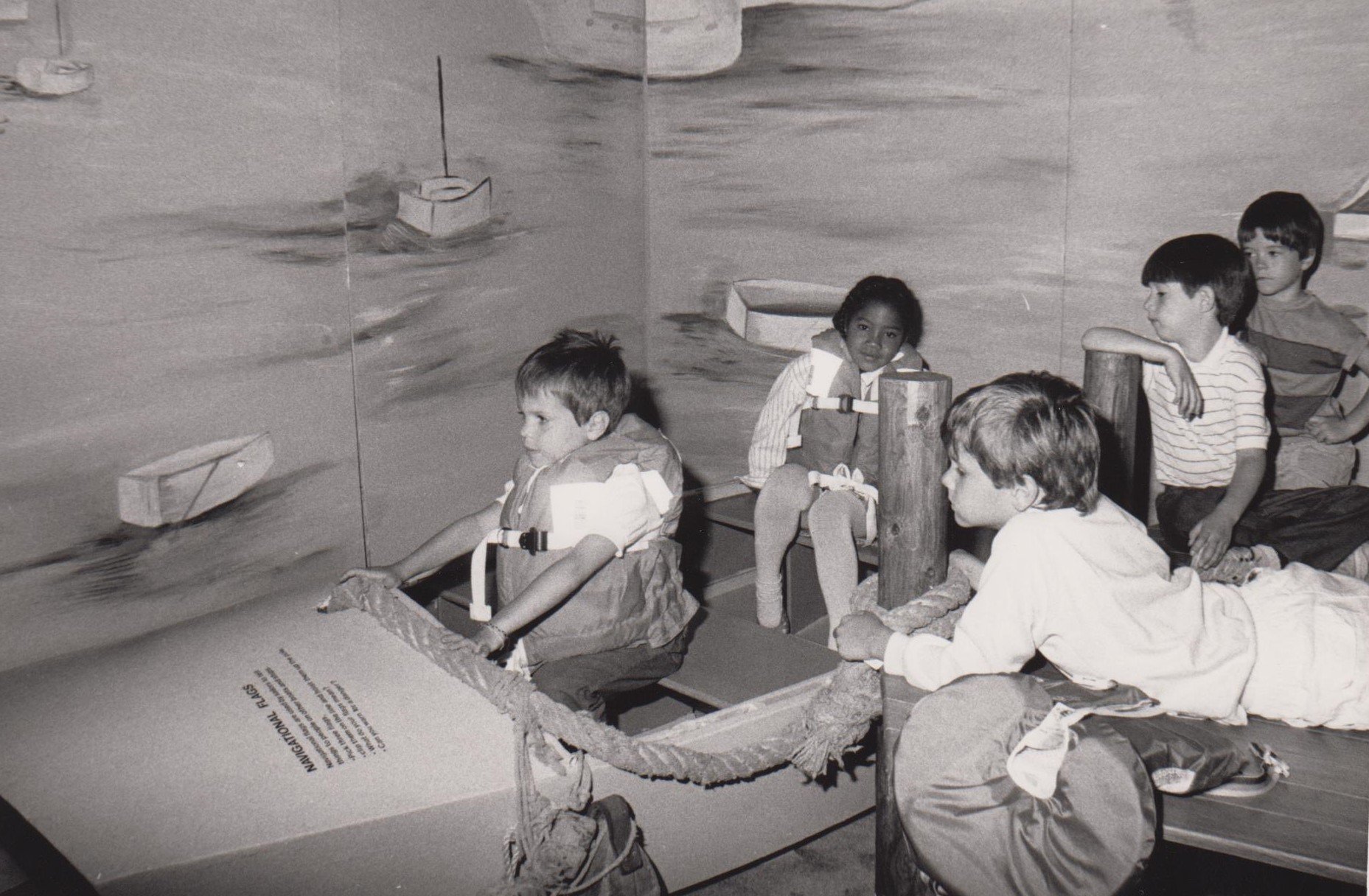 In the 1970s, Montessori educator Portia Sperr experienced the lack of museums and institutions in Philadelphia willing to host her 5-year-old students for hands-on learning opportunities outside of her classroom. As a result, she gathered a group of idealistic families, and the idea for the Please Touch Museum was born.

Please Touch Museum was founded on a simple premise: create a place where children could explore the world through self-directed curiosity and “learn through play.” On October 2, 1976, Please Touch Museum opened its pilot-program, nestled among the dinosaur skeletons and woolly mammoths in 2,200 square feet in the Academy of Natural Sciences, which only accommodated 25 children at a time. Staffed exclusively by volunteers, the museum was open a few hours each week.

In the beginning, the exhibits were basic and wonderful. Children played and “touched” the exhibits that engaged their senses and ignited their imaginations, while parents fought the instinctive urge to say, “Don’t touch that!” There was water play and dress-up costumes, including a Chinese opera headpiece donated by renowned Philadelphia architect Ed Bacon. He and his wife, Ruth, who was an early-childhood educator herself, were one of the founding families of Please Touch Museum.

There was also an exhibit focused on hands including skeletal x-rays of hands of children and adults. “Please Touch Museum is all about hands-on learning so why not have an exhibit on hands,” shared Sperr with a twinkle in her eye.

Word spread through town about the new children’s museum and soon, long lines of kids and adults, sometimes numbering more than 100 people, waited in line to experience the museum. The queue stretched into the Dinosaur Room at the Academy of Natural Sciences, so museum staff sent entertainers to amuse the children as they waited. At that time, visitors were only allowed to say in Please Touch Museum for 30 minutes.

Just like the children it served, Please Touch Museum began to grow bigger and bigger with each passing year. 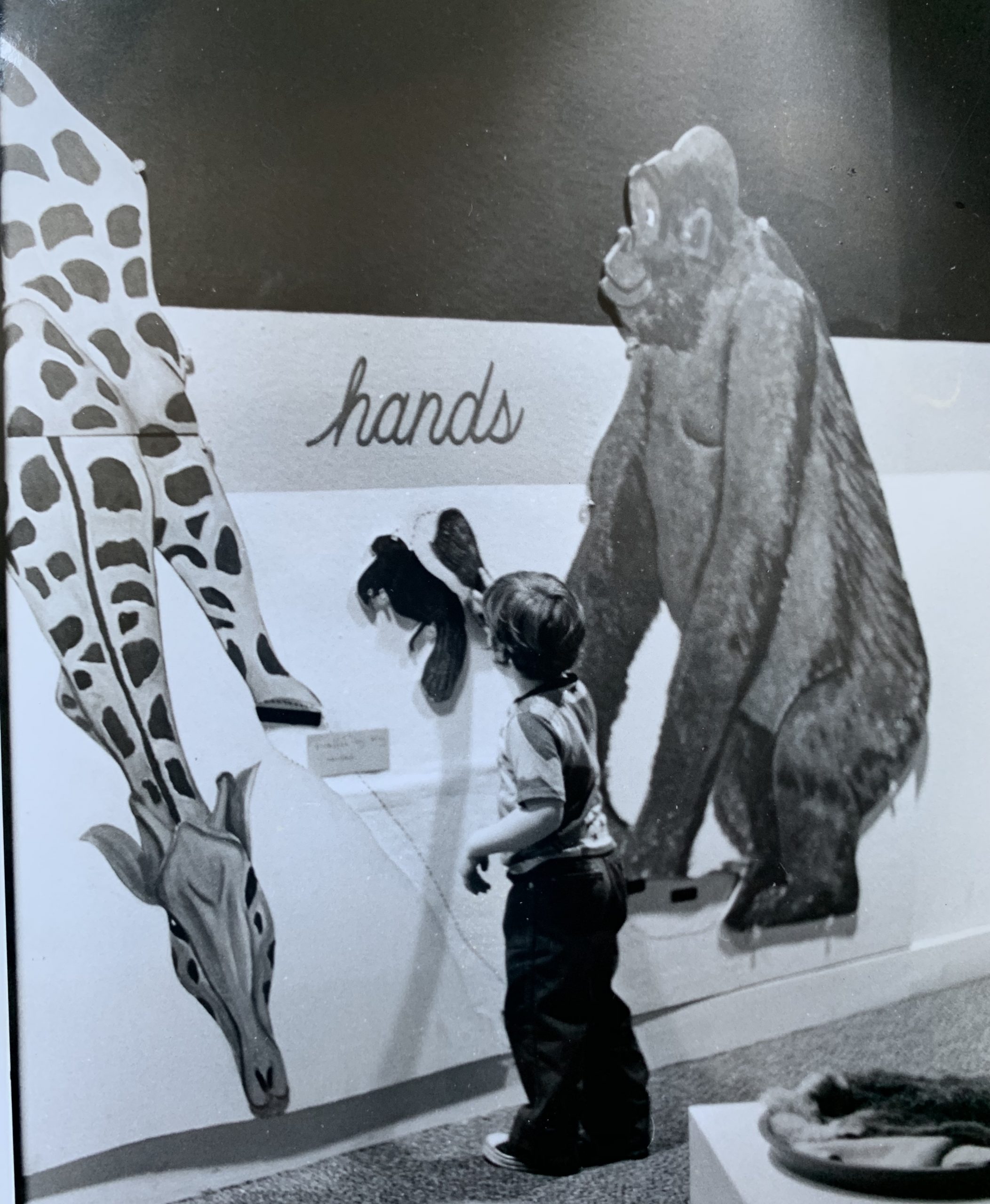 By 1978, the pilot project had grown into a full-fledged museum of its own, expanding its hours and relocating to Cherry Street. During the next four years, the Museum consulted scholars from several disciplines to add intellectual content to its exhibits and developed culturally diverse programs designed for young audiences. The museum kept growing and another move was warranted.

By 1983, the Museum had purchased and renovated a three-story, 30,000 square foot building on North 21st Street in the heart of Philadelphia’s museum district. During its time there, attendance and membership grew as the museum emerged as a force in early childhood learning. The museum was accredited by the American Alliance of Museums in 1988, launched the first publishing award that honored books for young children, and purchased the building next door to expand exhibit space.

Even after expanding the 21st Street location by 40% in 1995, the museum still felt cramped as more and more visitors from around the world came to learn through play at Please Touch Museum.

In 2002, the president of the Philadelphia Zoo recommended Please Touch Museum leadership team consider relocating to Memorial Hall in Fairmount Park, which had fallen into disrepair. 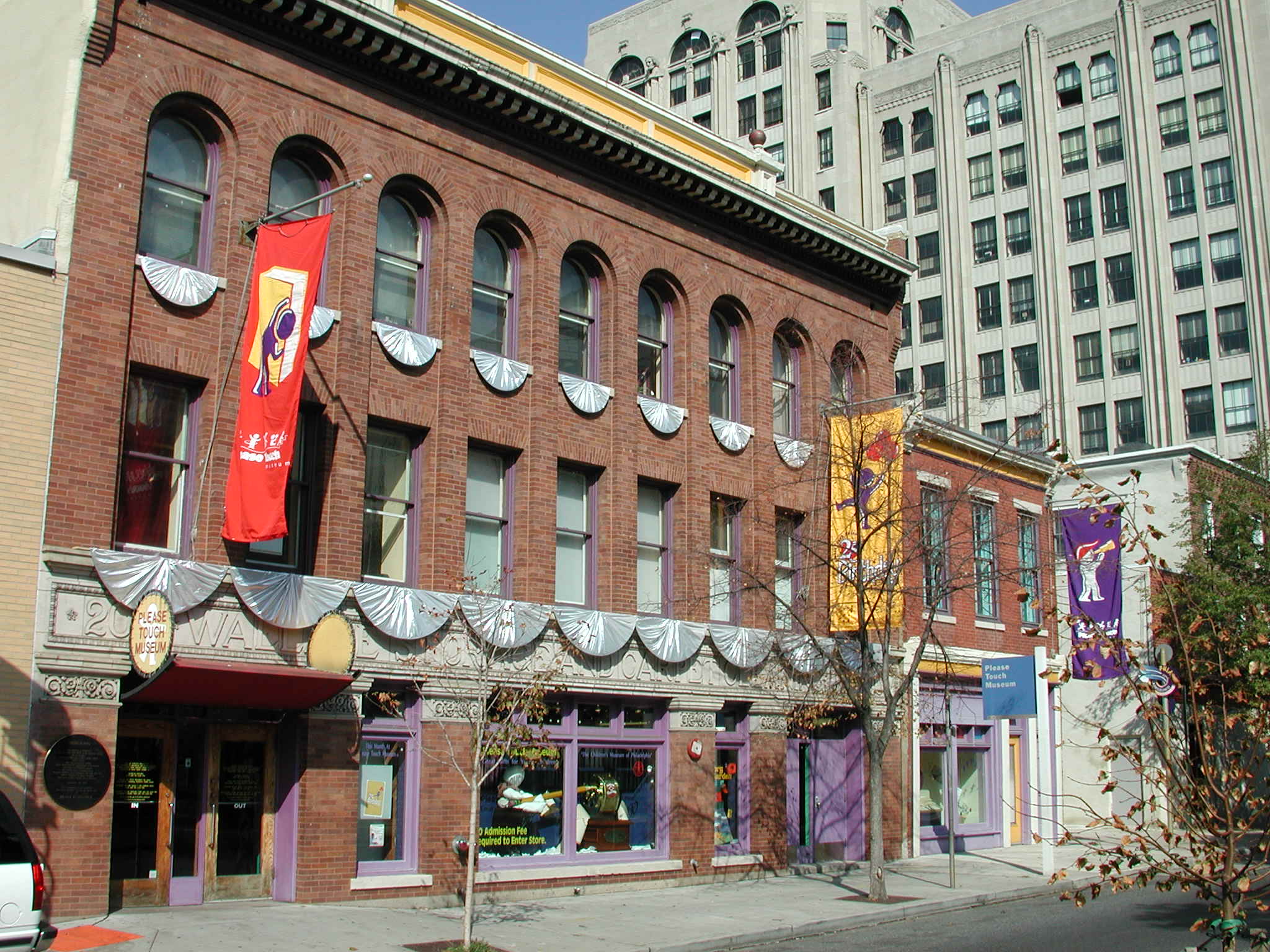 The move to historic Memorial Hall

A few days after the phone call with the president of the Zoo, the leadership team headed to Memorial Hall. They toured the ailing Beaux-Arts building which opened on May 10, 1876 as the main Art Gallery of the Centennial Exhibition, housing over 4,300 artworks from around the world. Since then, Memorial Hall had been home to the Pennsylvania Museum and School of Industrial Art (which would later become the Philadelphia Museum of Art and the University of the Arts); the Fairmount Park Commission and its recreation center complete with basketball courts, boxing ring, tennis court, and swimming pool; and the Philadelphia Police Department Accident Investigation Unit.

On February 14, 2005, Please Touch Museum signed a long-term lease to occupy Memorial Hall and the extensive restoration work to bring the building back to its original glory began later that year. On October 18, 2008, Please Touch Museum opened its doors to visitors in historic Memorial Hall. Favorite exhibits from 21st Street like the Septa Bus, Alice’s Adventures in Wonderland and the Supermarket found their way to the museum’s new location. 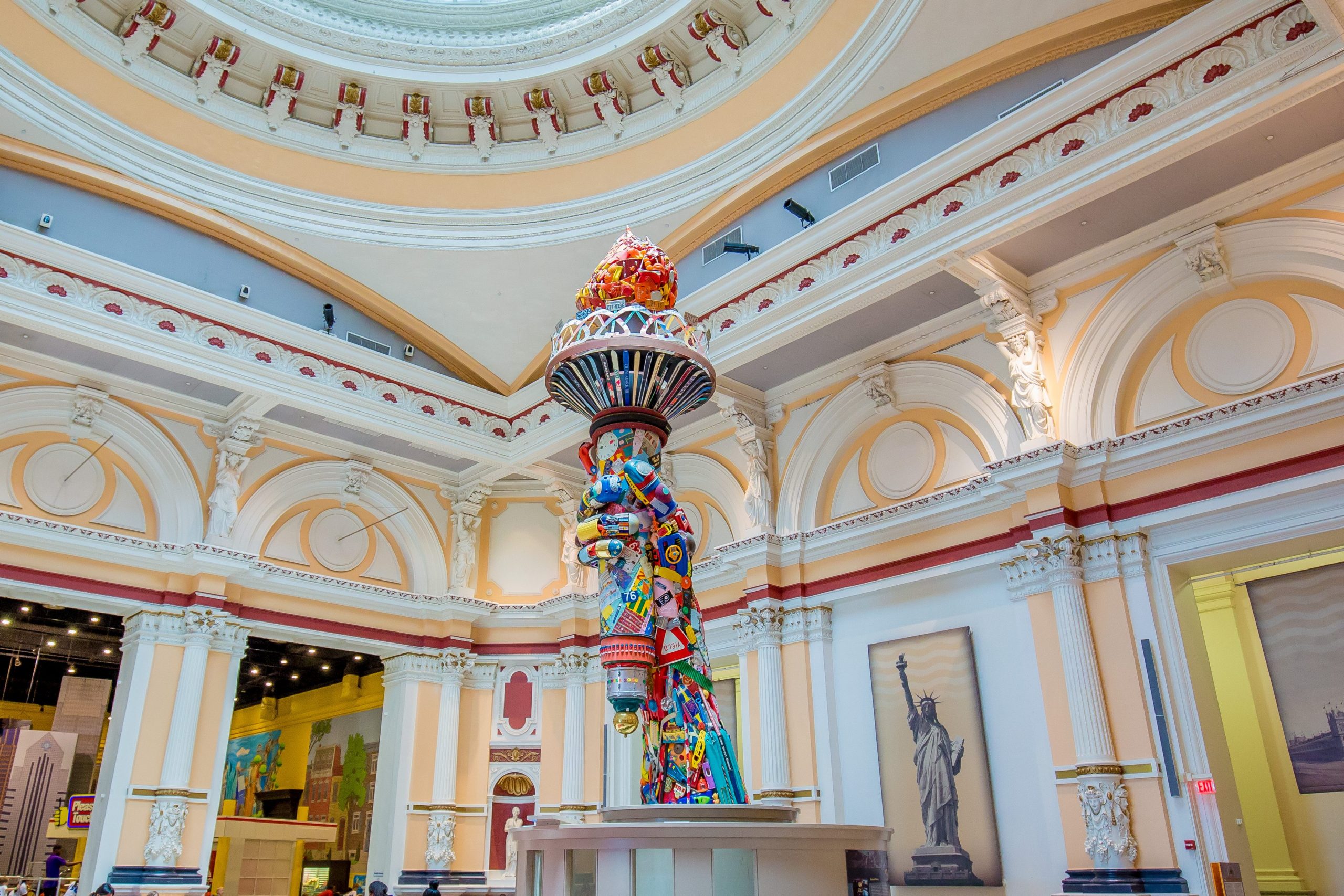 To unite the magic of a children’s museum with the majesty and history of Memorial Hall and the Centennial Exposition, a “monument to play” sculpture was installed in the great hall. Artist Leo Sewell created a 40-foot tall replica of the Statue of Liberty’s Arm and Torch using nearly 2,000 toys. The Statue of Liberty’s actual Arm and Torch made its public debut just up the road from Memorial Hall during the Centennial Exposition, raising money for the construction of the statue’s foundation on Liberty Island.

Additionally, visitors could once again view the historic scale model of the Centennial Fairgrounds that has been on the lower level of Memorial Hall since 1901. First exhibited at the Spring Garden Institute in 1889 and later moved to City Hall in 1890, the 1′ to 192′ scale model was commissioned by John Baird and hand crafted by artisans to include every exhibition hall, support building, road, train track, gulley, reservoir and observation tower that were on the grounds for the Centennial Exposition in 1876.

Memorial Hall is the perfect home for a children’s museum that is dedicated to learning through play while preserving the history of Philadelphia childhood. It is a city treasure, restored to its original purpose as a museum which offers all families a celebration of the timeless joys of childhood.

Today, Please Touch Museum is nationally recognized as a leader in children’s museums, and consistently ranks as a Top 10 Children’s Museum in the country by USA TODAY/10 Best Readers’ Choice Awards.

And most importantly, children and families come to Please Touch Museum to experience the magic and wonder of learning through play in a museum that was designed just for them, located in a historical building that combines the beauty from the past with the imaginations of today.